In the last tutorial we setup the basics for an interactive world and inventory system. We created the interfaces, the container, the item actor and the necessary inputs and PlayerController but everything we did had little to no user feedback, which makes our game incredibly hard to play - unless you're going for an old school write everything down on notepaper kind of playstyle.

So in this tutorial we're going to walk through setting up a super awesome UI for SerfsUp.

Why do we need an interface for our GameHUD? Well, we don't really but it simplifies things a lot - first we don't need to deal with casting or checking the type of HUD. Second, it's much cleaner to route all the update calls through the world HUD class instead of binding tons of events in the HUD or updating everything on tick. The key to a performant UI is only updating the UI when we need to, ie. something has happened elsewhere in the game prompting a UI redraw.

You probably know the drill by now, we're creating a new interface file

For now all we need to do in this file is to add the GameHUD interface.

Reminder: Go into Graph, Class Settings and Add the GameHUDInterface to Inherited Interfaces. 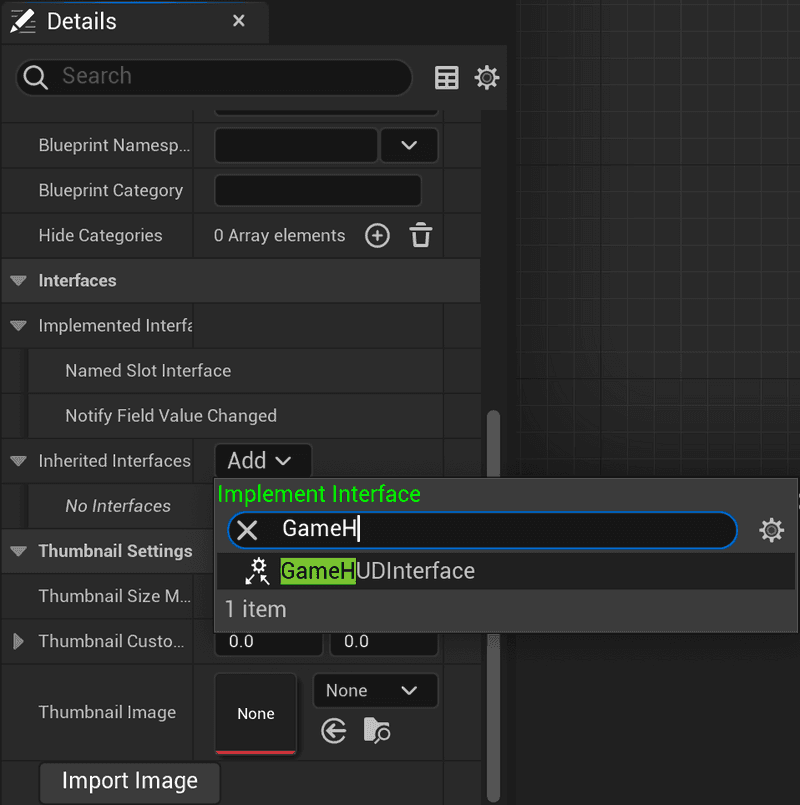 We could easily just put all the widgets directly in the GameHUD but it's a better practice long term to decompose your UI down into components so let's start making the components we need for a full fledged UI.

We need two main components for this tutorial, an InteractableObject overlay and an Inventory screen to show the items we picked up.

Once open we need to drag in the following but you can arrange it or make it look any way you like. We're going to go with the following wrapping components

Inside of the wrapping components (ie the lower vertical box) we're going to setup our 3 text lines. 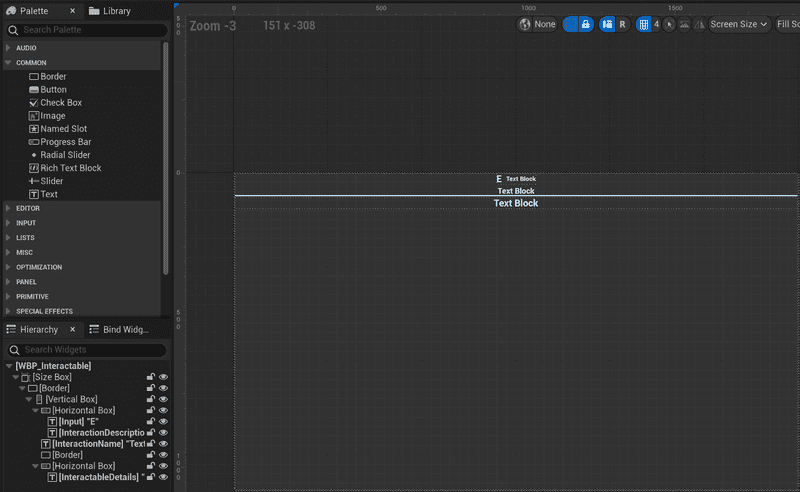 We will need some way for our WBP_GameHUD to update the text of this interactable widget. We could expose each variable directly and have the parent class set it but it's much easier to create an Update function that takes a pointer to an Actor and let the component handle the right updates.

Create a function called "UpdateInteractable" and give it one input variable, "Actor" of type Actor object reference.

We'll connect a simple sequence (I find it cleaner than chaining calls), the first will call GetName of InteractableInterface against the actor to get the Interactable name and SetText of InteractionName that we defined above to the string.

The second will do the same but getting the GetInteractionText and setting InteractionDescription instead.

Once done, saved and compiled your component should look like this. 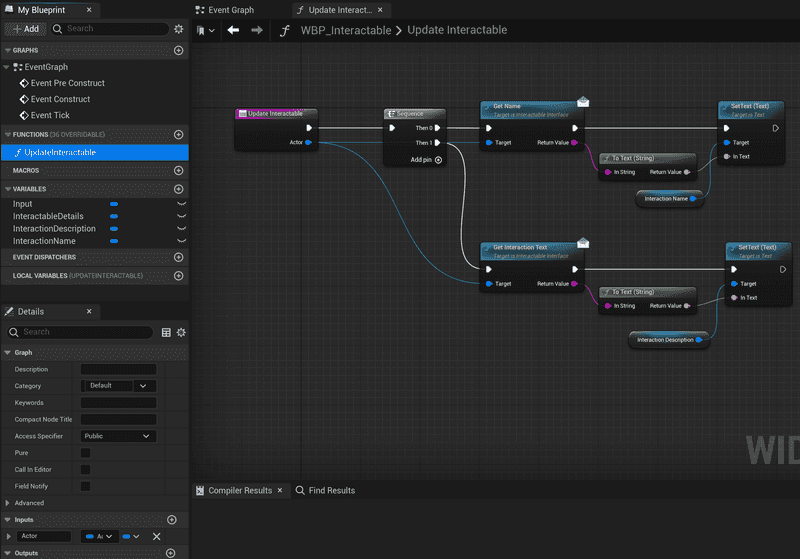 We could create something really in depth and beautiful here but for the purpose of this tutorial it's more about the wiring and the structure than a deep dive into Lists and Interface design so we're going to have a UI that just prints a string of every item in your inventory separated by comma's. Super rough but it will show you everything working and let you tweak and design to your hearts content.

Let's start by creating a 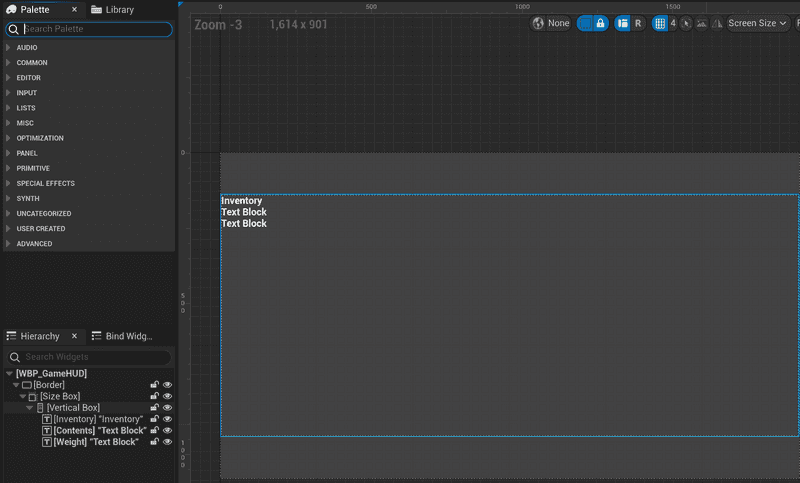 Similar to the interactable widget, we need a function to update the inventory so lets create a void function called UpdateInventory.

Inside of this function we need to create a Local Variable - ItemNames as a String array. Then we're going to create a sequence ot do two things

Putting it all together

Back inside of your WBP_GameHUD we're going to add our components to the overall HUD. Let's start by adding a CanvasPanel to our WBP_GameHUD.

Inside of the CanvasPanel we're going to do something new and instead of adding base widgets, we're going to add our two components. If you search in the pallete for Interactable you should be able to add WBP_Interactable to your UI.

Drag the component in and rename it to "Interactable" (and feel free to position it where you want, I have it in the horiztonal center of the screen just below vertical center).

We'll do the same with WBP_Inventory, add it, rename it to "Inventory" and align it where you want.

Lastly, to make it easier to aim at things, let's add a tiny little crosshair in the center of the screen by adding a border, centering it in the screen, sizing it to 10x10 and set the alpha to 0.3. 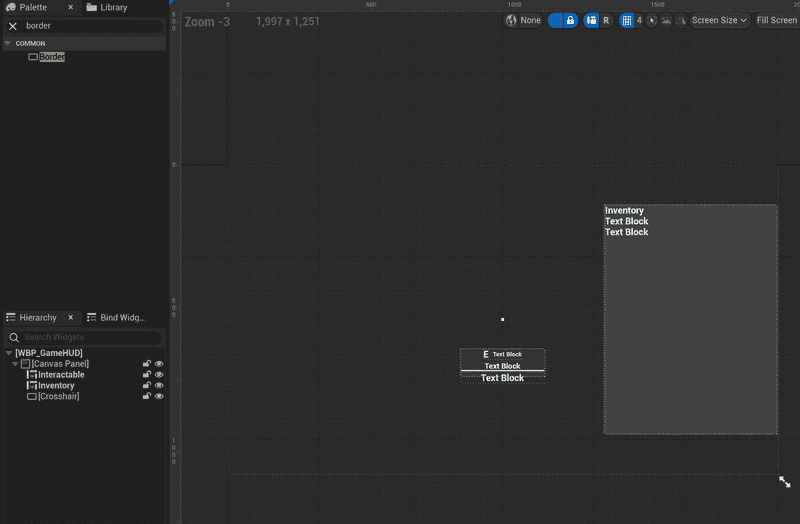 Inside of the graph we want to add a few variables.

Now we could just hook up all the code in the top level event graph for each of the HUD Interface functions but I find it cleaner to make internal functions instead so let's start adding the functions.

Let's create UIOpenHUD first, this one is simple, if bIsHUDOpen is false, set it to true

Next create UIOpenInventory and set bIsInventoryOpen to true and call UpdateInventory on our Inventory variable.

Last function to create, OnItemTaken which should take an Item struct. We could add a super nice little dynamic component that renders the item we picked up but for now in this tutorial let's just print the string to the game. You should know enough after we hook everything up to make something better yourself as homework :) 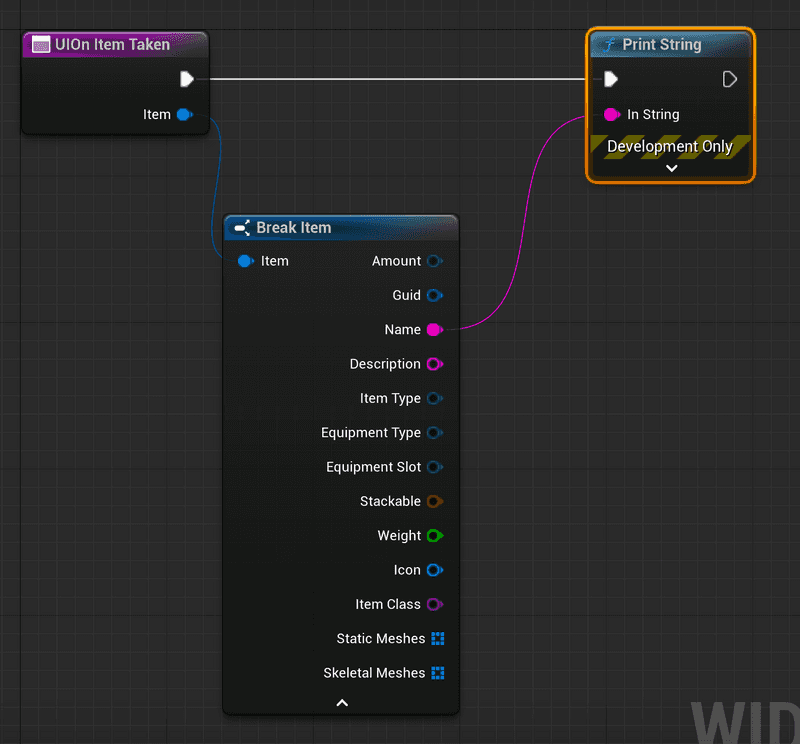 Each of them will create an event that we need to hook up to the corresponding UI function. 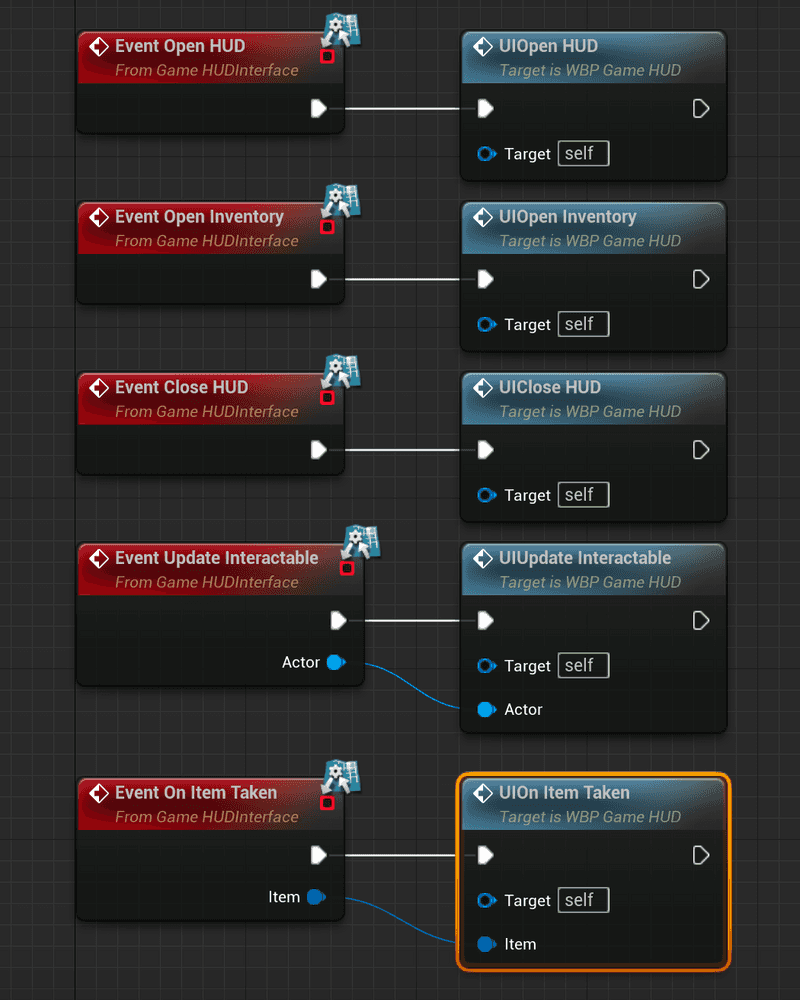 For the two Interface functions that return values they will create actual nested functions so if you double click on IsInventoryOpen and HUDIsOpen we can just directly return both boolean values. 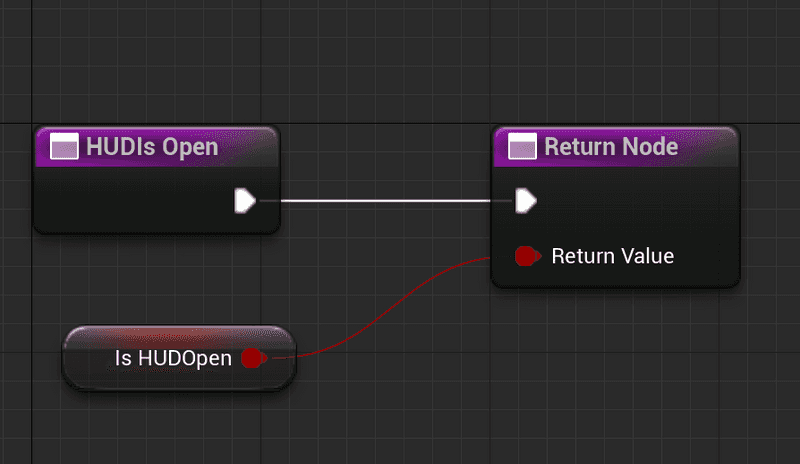 Last step inside of GameHUD is to bind the visibility of our components to the state of the HUD. That means showing the inventory when bIsInventoryOpen is true and showing the Interactable component when FocusedActor is not null.

Jump back into the designer, click on Interactable and scroll down to visibility in the details panel. On the right hand side where it says Bind in a dropdown, press the dropdown and create a binding.

It will automaticaly create a function for us, Get_Interactable_Visibility. Inside this function we need to pass a select into the return node which checks if FocusedActor is valid. If it's valid, we should set the visibility to Visible otherwise Hidden.

We do the same to our Inventory component. Inside this function we need to pass a select into the return node, set bIsInventoryOpen to the index and on false, set to Hidden and on true set to Visible like so 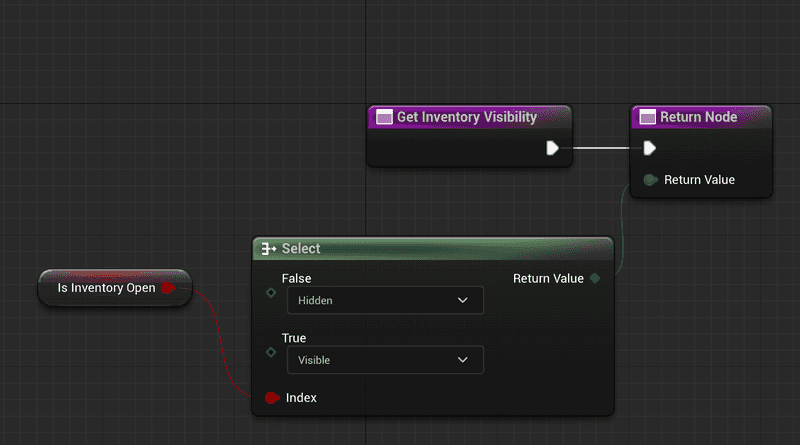 Next up we'll create the GameHUD class. This will be the default HUD class for the game engine when we're playing the game and not on a menu. This class is effectively the owner and proxy for all the GameHUDInterface calls to the WBP_GameHUD.

Then let's create the GameHUD classes

Step 4 - Set our HUD as the default for our game

To make sure our HUD loads as default for our GameMode, open

Nothing will work yet since we haven't connected our HUD to our GameEvents but it's a good time to test that everything compiles and loads properly. At the very least, loading into our game now we should see our crosshair which will let us know that everything is working as expected. 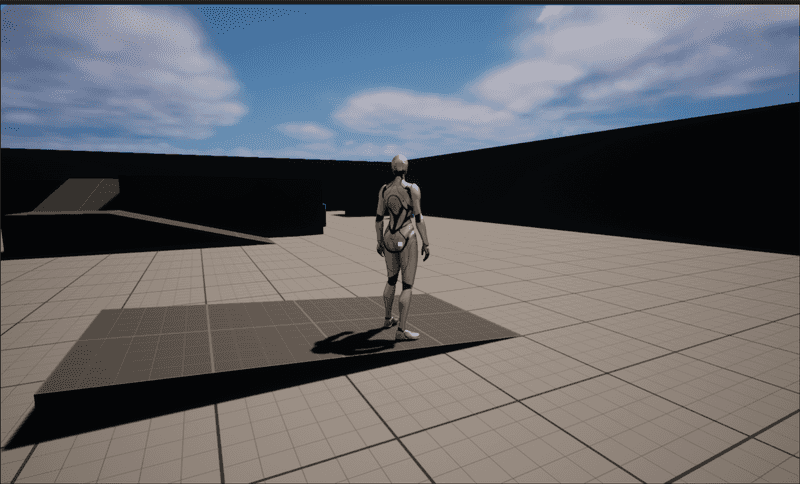 And there it is, right in the center of the screen.

Connecting all the HUD pieces

We need to add a few more things to pipe all the pieces together. Since we covered a lot of this in the last Tutorial, we're going to skim over this part but feel free to refer to the previous tutorial.

If you play the game now and you've followed along closely you'll now see your UI start to update as you look at items in the world. If we put the cursor over the axe you'll see the interactable window appear with the item details. 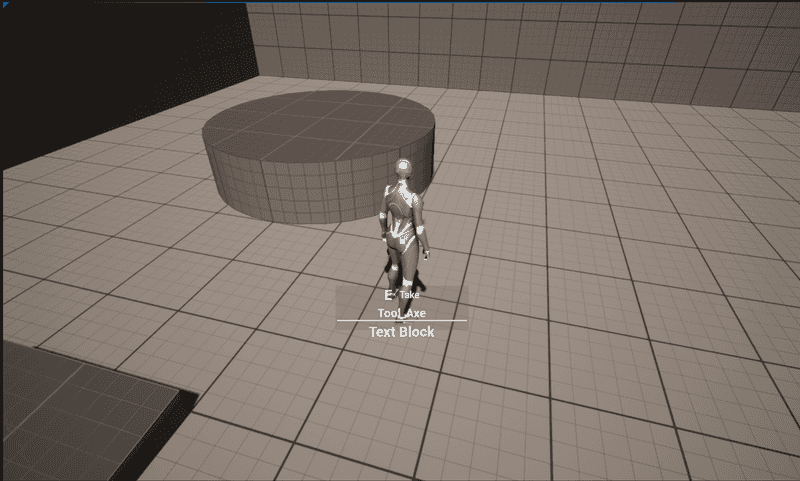 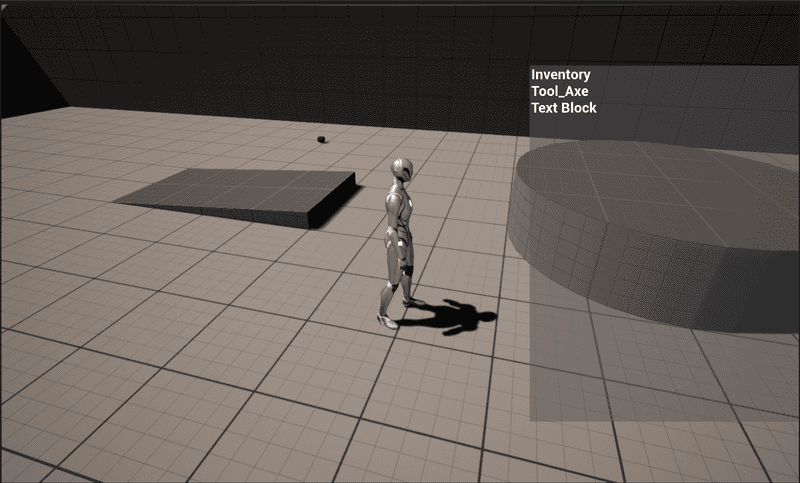 Pretty incredible, those are all the building blocks you need to extend and work with an Inventory system, Interaction system and a UI.